Cross-Culturalism: Symbols of Mt. Fuji and the Eiffel Tower 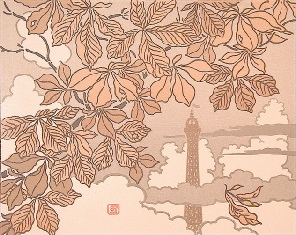 Some of Henri Riviere's "36 Views of the Eiffel Tower." are in the Phillips' exhibition, Snapshot: Paintings and Photography, from Bonnard to Vuillard.  Five Metro stops away, the Smithsonian's Sackler Gallery is hosting an exhibition of Katsushika Hokusai's "36 Views of Mt. Fuji."   The Cherry Blossom Festival just celebrated the100th anniversary of Japan's gift of cherry trees  to Washington, DC, a capital city based on French urban design patterns. These exhibitions coincided with that event. 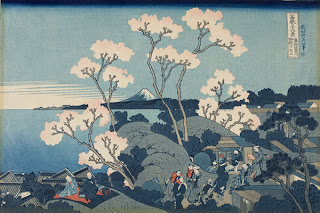 The Sackler exhibition has selected the most vivid images available of Hokusai's woodblock prints and the colors are vibrant.  Blues predominate, but most  prints have at least 4 other hues.  Riviere's images are printed as color lithographs with more neutral color harmonies.  French artists admired Japanese woodblock prints and Riviere owned at least 800 of them. The Phillips' exhibition--definitely worth the visit--also has small paintings and many photographs by Post-Impressionist artists such as Edouard Vuillard, Pierre Bonnard, Maurice Denis, George Hendrik Breitner, Henri Evenepoel and Felix Valloton.

Both artists create different atmospheric effects, including the effects of wind, snow and various cloud formations. In many prints by each artist, the subjects, Mt. Fuji or the Eiffel Tower, are subordinated to other scenery.  Yet, Riviere used Hokusai's examples as inspiration rather than imitation. 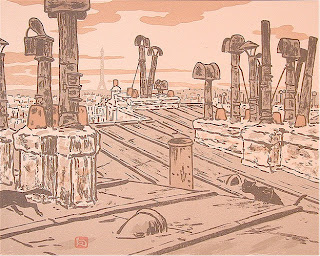 Through rooftops and chimneys of Paris' many buildings we vaguely see the Eiffel Tower. A cat pokes through the diagonal zigzag of lines in the foreground as a dog runs away. Their silhouettes remind me
that Riviere did shadow plays for
Le Chat Noir (the Black Cat). 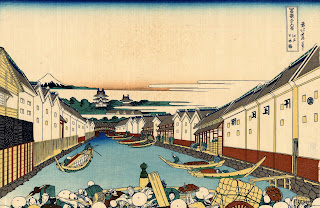 Warehouses line a canal to form diagonal lines which lead  first, to Edo Castle, then to  Mt. Fuji, on the upper left corner,  (No 31 - Nihonbashi at Edo) 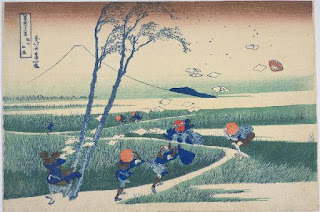 A large Mt. Fuji dominates the upper left, as a strong wind blows.  In this Autumn view, the people look
small compared to the force of the wind  (No. 18 - Sunshū Ejiri, in Suruga Province). Both
Hokusai and Riviere take the viewers through a yearly cycle of changing
weather conditions.  Hokusai's work dates to 1830-32. 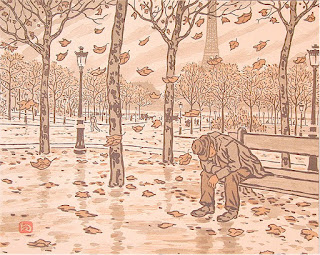 Riviere also creates the sensation of Autumn wind surrounding a lonely man on a park bench. The
Eiffel Tower stands directly above him. 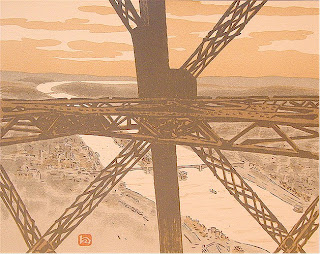 Riviere spent a year watching the building of the Eiffel Tower.  During that time, he was able to go up into the construction and take photographs from the inside out.  Twelve of these photos are in the Phillips'
exhibition, along with the lithograph above based on one of those pictures
The Phillips' exhibition compares these prints to photographs Riviere shot of workers constructing the Eiffel Tower. Riviere's primary profession was as a theatre set designer for Le Chat Noir, where he created shadow plays. As an artist, he is less well-known than Hokusai, although there is something magical about his style, perhaps a reflection of his work with silhouettes in the theatre and with photography. His prints were published in 1902 several years after he had taken the pictures of the Eiffel Tower.

Hokusai is one of Japan's greatest artists.  There are two more exhibitions of paintings and screens by Hokusai in the Freer Gallery of Asian Art, which holds the world's largest collection of Hokusai and is attached to the Sackler Gallery. The rarely-seen Boy Viewing Mt. Fuji, ink on silk, is in a medium too fragile for continuous display, but it is included with the Hokusai paintings.

It is an interesting to see that Hokusai, as an eastern artist, identifies with the power of pure nature, a volcanic mountain which dominates the Japanese landscape, while the western artist's symbol is a man-made construction, built for the World's Fair of 1889 and still a dominant symbol of Paris today.

Hokusai's Boy Viewing Mt. Fuji, 1846, is a peaceful painting which expresses the grandeur of Mt. Fuji in color and ink on silk.  It is part of the Smithsonian's Freer Gallery of Asian art and will be on view until June 24, 2012 . 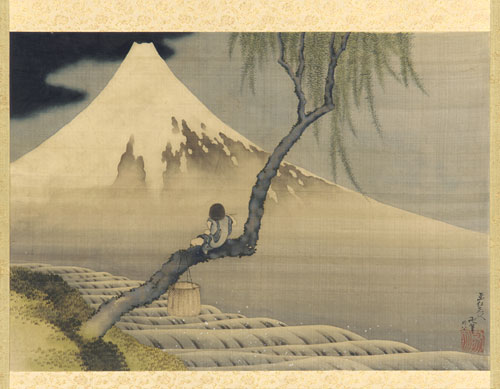 Posted by Julie Schauer at 9:59 PM

Julie Schauer
This blog is meant to connect students past and present, and interested people everywhere. Art is for everyone, and this blog hopes to make it easier for all to understand. In these days of polarization, when people are becoming increasingly divided, art can help us better understand each other and our common humanity. Posts are about exhibitions, often comparative and from a different viewpoint. Some blogs are about art sites or the ideas of art, and very occasionally, interpretive. The best artists don't need drugs to make them more creative. In time, those who rely on drugs become less creative.